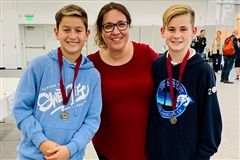 Debate is much more than public speaking. It is a demanding and stimulating mental sport that teaches a myriad of skills that prepare students for academics and life.
These include research, analysis, critical thinking, planning, argumentation, reasoning, listening, collaboration, responsibility, note-taking and outlining.

Curtis students have participated as a team in competitive debate for 18 years. Membership is open, by tryout, for a limited number of 6th graders. During the debate season, members meet once per week at lunchtime to research and discuss the topics of upcoming competitions, practice debate skills, and prepare for tournaments.

Curtis is a member of the Golden West Debate League, the only league designated solely for 5th and 6th Grade students. The GWDL is the founding league in the Youth Public Debate Program, an offshoot of the Middle School Public Debate Program, a debate outreach initiative of Claremont McKenna College. Tournaments are held with local area schools on weekends.